Five years ago, we wrote in this blog about the strict proportionality between the CPI inflation and the actual interest rate defined by the Board of Governors of the Federal Reserve System, R. Briefly, the cumulative interest rate is just the cumulative CPI times 1.4. There are periods when the interest rate deviates from the long-term inflation trend, which has been almost linear since 1972. Here, we extend the observational dataset and discuss the most probable reason why the FRS actually not control inflation by presenting the actual economic force behind price inflation, as we presented in a series of papers [e.g., 1, 2, 3, and 4].  Overall, inflation is a linear lagged function of the change in the labor force. The latter is driven by a secular change in the participation rate in the labor force (LFPR) together with a general increase in working-age population. In other words, increasing the labor force pushes inflation up, and decreasing the labor force leads to deflation.

Introducing new data obtained from 2016, we depict in Figure 1 the effective rate R divided by a factor of 1.37 (see our previous post for details) and the consumer price inflation. One can see that R lags behind the CPI since 1980, i.e. inflation grows at its own rate and R has to follow up. The idea of interest rate is that a higher R should suppress price inflation when it is high due to the effect of expensive money. During deflationary periods with a slow economy, low (in some countries negative) R has to channel cheap money into the economic growth. The reaction of inflation is also expected not shortly but with some time lag.

The cumulative influence of the interest rate should produce a desired effect in the long run, and inflation should go in the direction towards acceptable values. Figure 2 displays the cumulative effect, i.e. the cumulative values of the monthly estimates of R and CPI multiplied by 1.37. This is an intriguing plot. In the long run, the R curve fluctuates around the CPI one and returns to it. It is hard to believe that the sign of deviation of R from the 1.37CPI curve affects the behavior of the CPI, which is practically linear. Therefore, the influence of monetary policy is under doubt.

The FRS has tried all means to return the CPI to R without any success and has to return R to the CPI!

We have already described the secular changes in LFPR in 2013, 2014, 2015, and 2021. Figure 3 illustrates the genuine periodicity of the LFPR change and Figure 4 describes the evolution of LFPR as measured by the Bureau of Labor Statistics as a function of time: the LFPR curve is accurately approximated by a simple function: LFPR(t) = 62.7+4.3SIN(2π[t-1978]/T). The period T=74 years and the double amplitude is 8.6, i.e. the largest LFPR change is 8.6%. Currently, the LFPR is strictly in the center of the range and in the middle of the fall from 1996 to 2034. 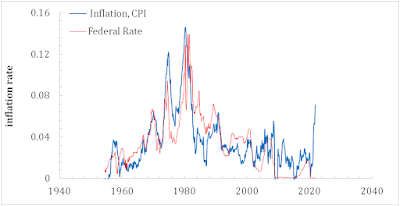 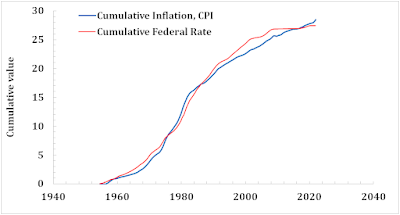 Figure 2. Cumulative values of the curves in Figure 1. 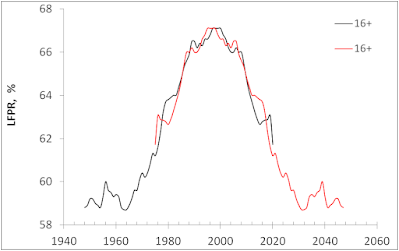 Figure 3. LFPR evolution: direct and time inverted (mirrored) LFPR with the peak in 2000. 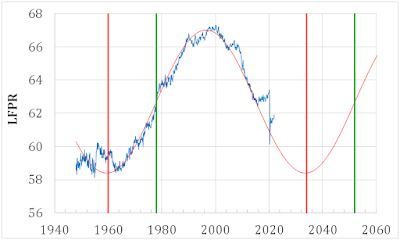 Figure 4 .The rate of participation in the labor force (LFPR). LFPR is accurately approximated by a simple function: LFPR(t) = 62.7+4.3SIN([t-1978]/T). The period T=74 years. Red (start) and green (end) vertical lines highlight two periods of accelerated growth. The periods of accelerated growth last 1/4T =18 years. The next period will start in 2034.

I am lost in the WHO sex, sexual orientation, gender, and gender identity definitions

I am a bit lost in gender/sex definitions for sports. I took a brief look at the WHO gender definition . Gender is a social construct. WHO...