Five years ago I published a paper [1] introducing the concept of constant annual increment in real GDP per capita, G(t), as observed in developed countries. In the long run, the GDP growth as a linear function of time:

where G0 is the initial level of GDP per capita at time t0 in a given country, A is the country dependent increment measured in PPP dollars. Therefore, the rate of growth of real GDP per capita, dG/G, has a decelerating nonlinear trend:

This assumption gives excellent statistical results and explains the evolution of real GDP per capita in developed countries, as also was confirmed in our 2008 paper [2].

Hence, the task now is to track the progress of the economies under study. The figure below presents several important cases, which demonstrate the accuracy of our concept. Since the increment is assumed to be constant, the mean value of the annual GDP increment should coincide with its linear trend (see the paper for details). In reality, the linear regression line is very close to the constant level. In many cases (e.g. France, Italy, Japan), it oscillates around the mean value over time with a small amplitude. The hypothesis of the constant increment looks sound. 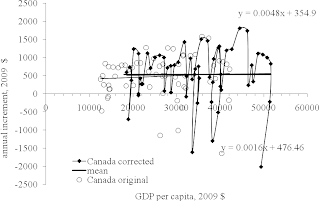 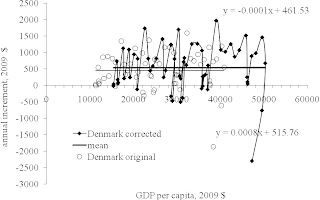 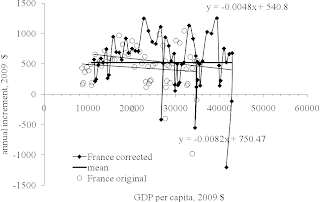 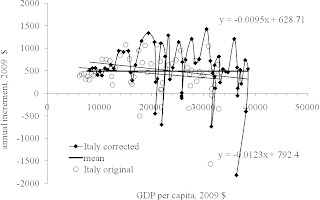 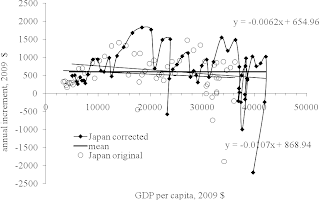 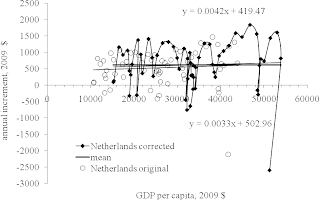 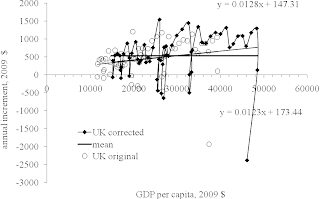 Figure. The increment of real GDP per capita vs. real GDP per capita in select developed countries. Thick line – the mean increment. Two solid lines represent two linear trends (also represented by their equations) as associated with the original and population corrected GDP estimates. All data are borrowed from the Conference Board data base (http://www.conference-board.org/economics/database.cfm).

Georg ERBER, The Problem of Money Illusion in Economics … 196

Cosmin FRATOSTITEANU, Guidelines for Promoting Science, Technology and Technical–Scientific Creativity, By Analyzing the Companies’ Performances, in the Context of the Globalized Economy …247

Bernard LANDAIS, The Monetary Origins of the Economic and Financial Crisis … 280

Piotr MISZTAL, Public Debt and Economic Growth in the European Union …292
at November 09, 2010 No comments:

Email ThisBlogThis!Share to TwitterShare to FacebookShare to Pinterest
Labels: JAES

I assume that the closing S&P 500 level of 1183 in October 2010 and its following growth to 1225 in November 2010 is not good news for the US stock market. Figures 1 and 2 update the previous versions published in this blog in September. Both Figures demonstrate that the difference between the predicted and observed curves has been increasing since September.

This observation raises a question on the following events. Our concern about possible repetition of the 1987 fall, if the index would continue its deviation from the predicted trend into October 2010 is on again. So, I see a danger of a severe panic on the stock market. Because Tuesday is a common day for such events, I cannot exclude that one of Tuesdays in the nearest future will end in a return of the observed curves to the predicted one.

There is also a chance that the population estimates underlying the prediction become wrong since September 2010. The methods of population projection and updates used by the Census Bureau are also not well predicted.

Below we repeat a mandatory part with a bit of mathematics for the readers interested in details of our model. The model is also presented in our working paper [1] and monograph [2].

The original model links the S&P 500 annual returns, Rp(t), to the number of nine-year-olds, N9. In order to extend the prediction in time we use the number of three-year-olds, N3, as a proxy to N9 and obtain a forecast at a six-year horizon:

where Rp(t+6)is the S&P 500 return six years ahead (in 2010 one can foresee the returns in 2016). Figure 1 depicts germane S&P 500 returns, both actual one and that predicted by relationship (1). Both curves are coinciding in practical terms.

Because of the observed linear growth in N3 one can replace it with linear trends for the period between 2008 and 2011, as Figure 2 shows. This model predicts that the S&P 500 stock market index will be gradually decreasing at an average rate of 37 points per month. All fluctuations in N3, as observed in Figure 1, are smoothed in this linear representation.

Figure 2. The observed monthly closing level of the S&P 500 stock market index and the trend predicted from the number of nine-year-olds. The slope is of -37 points per month. The same but positive slope was observed between February 2009 and April 2010. The last point in the observed series is October 31, 2010. The deviation between the predicted and observed curves has been increasing since September 2010.
at November 07, 2010 No comments:

We have published three monographs this year. All three reflect the problems and topics, which have always been the main topic of this blog: Economics as Classical Mechanics. If one has been following the blog from the very beginning s/he could have a great deal of knowledge about our concept and results. Random readers might be interested in specific topics from inequality to stock pricing.

Our publisher, the LAP Lambert Academic Publishing, encourages us and we are also happy to request a favour of all readers to help the overall promotion of these monographs. We would appreciate very much if you could leave a short review and/or evaluate the books on amazon.com:

Mechanics of personal income distribution: The probability to get rich 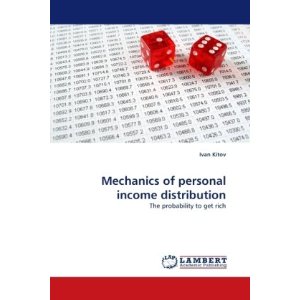 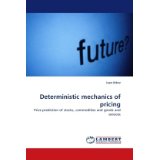 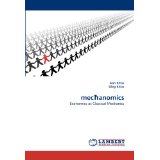 Thanks for your kind assistance