Nasty tricks with inflation in Japan

Consumer price index is a common measure of the overall price change in modern economies, which represents a broader indicator of the cost of living. For Japan, this measure has become extremely important during the last decade because of its very low if not negative value. Economists usually panic when cost of living decreases. Price deflation is a major danger for long term economic growth since bank credits (read investments) are highly suppressed.  Everybody knows: no investment -  no growth.  Hence, any news about positive inflation is welcome and no tricks are bed to get this news.


Figure 1 shows the evolution of two integral inflation measures for Japan: the cumulative CPI inflation and the cumulative GDP deflator (DGDP).  The latter covers all prices in a given economy, while the CPI only a part of them related to consumer goods and services. By definition, the DGDP should nest all CPI items, but the CPI is calculated in a different way based on a basket of goods and products with their shares fixed over a few years. In that sense, the CPI does not follow all economic changes up.


The graphs in Figure 1 are different from inflation indices expressing the absolute change in price level. The cumulative inflation time series describes the relative change in the overall price.  The difference between the DGDP and CPI is dramatic and increases since 1974. From 1974 to 2012, the difference between the cumulative inflation reached 0.37, and the rise in CPI inflation is by ~50%  larger than that in the DGDP.
What is the reason?
The DGDP plays a different role in economics. This is the most important value for real GDP growth. Real GDP is not a measured macroeconomic variable, but rather the ratio of the nominal GDP and the GDP price deflator. Larger DGDP values give smaller real GDP.


So, this is very important to keep the DGDP as low as possible and the CPI as high as possible. This is a   nasty trick which, mathematically, must result in negative absolute prices of all goods and services not in the CPI.  Do not trust the CPI estimates in Japan. Figure 2 shows two countries without such a dramatic difference between CPI and DGDP: Austria and France. In the USA, the difference between CPI and DGDP has been also increasing since 1978 (Figure3). But the FRB prefers to use Purchase Consumer Expenditures (PCE) instead of the CPI to characterize consumer prices. Figure 4 shows that the DGDP and PCE are similar in the USA. 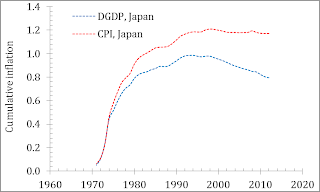 Figure 1. The evolution of cumulative rate of CPI inflation and GDP deflator in Japan. 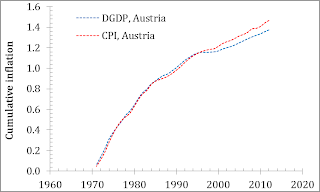 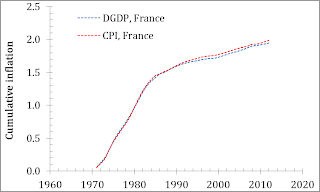 Figure 2.  The evolution of cumulative rate of CPI inflation and GDP deflator in Austria and France. 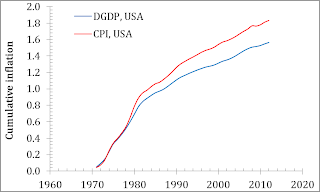 Figure 3.  The evolution of cumulative rate of CPI inflation and GDP deflator in the USA. 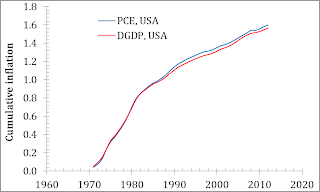 Figure 4.  The evolution of cumulative rate of PCE inflation and GDP deflator in the USA.
at September 13, 2013 No comments:

Paper in PDF is avilable on IDEAS

We model the rate of inflation and unemployment in Austria since the early 1960s within the Phillips/Fisher framework. The change in labour force is the driving force representing economic activity in the Phillips curve. For Austria, this macroeconomic variable was first tested as a predictor of inflation and unemployment in 2005 with the involved time series ended in 2003. Here we extend all series by nine new readings available since 2003 and re-estimate the previously estimated relationships between inflation, unemployment, and labour force. As before, a structural break is allowed in these relationships, which is related to numerous changes in definitions in the 1980s. The break year is estimated together with other model parameters by the Boundary Element Method with the LSQ fitting between observed and predicted integral curves. The precision of inflation prediction, as described by the root-mean-square (forecasting) error is by 20% to 70% better than that estimated by AR(1) model. The estimates of model forecasting error are available for those time series where the change in labour force leads by one (the GDP deflator) or two (CPI) years. For the whole period between 1965 and 2012 as well as for the intervals before and after the structural break (1986 for all inflation models) separately, our model is superior to the naïve forecasting, which in turn, is not worse than any other forecasting model. The level of statistical reliability and the predictive power of the link between inflation and labour force imply that the National Bank of Austria does not control inflation and unemployment beyond revisions to definitions. The labour force projection provided by Statistic Austria allows foreseeing inflation at a forty-year horizon: the rate of CPI inflation will hover around 1.3% and the GDP deflator will likely sink below zero between 2018 and 2034.
at September 13, 2013 No comments:

PDF paper is available on arxiv.org

The evolution of the rate of price inflation and unemployment in Japan has been modeled within the Phillips curve framework. As an extension to the Phillips curve, we represent both variables as linear functions of the change rate of labor force. All models were first estimated in 2005 for the period between 1980 and 2003. Here we update these original models with data through 2012. The revisited models accurately describe disinflation during the 1980s and 1990s as well as the whole deflationary period started in the late 1990s. The Phillips curve for Japan confirms the original concept that growing unemployment results in decreasing inflation. A linear and lagged generalized Phillips curve expressed as a link between inflation, unemployment, and labor force has been also re-estimated and validated by new data. Labor force projections allow a long-term inflation and unemployment forecast: the GDP deflator will be negative (between -0.5% and -2% per year) during the next 40 years. The rate of unemployment will increase from 4.3% in 2012 to 5.5% in 2050.