Real GDP in US - mediocre growth /slow down. As in the next ten years.

When considering freedom of speech one should remember that word is recognized (in common sense as well as in criminal legislation) lethal weapon. Words in various forms stay behind almost all actions - positive and negative. So, be careful when supporting all speeches.
at January 17, 2015 3 comments:

Oil prices have been falling since the last summer. Saudis make it clear that they have deep interests in retaining (increasing) their market share as long as possible. Reasonable explanation of the current market strategy. Timing is perfect and shale/tar/renewables over invested during the last decade seem having no chances at a one-two year horizon. European countries with windmills producing more than 25% of energy will be interesting case to observe.
However, this is just the first step into the global war for market shares. Among many negative consequences, falling oil prices can make a few good things for oil producing countries. Transportation becomes cheaper. For example, Russian coal gets a $40 advantage and becomes more and more attractive for many consumers. Moreover, dramatic rouble  weakening adds  competitive power to Russian export while import of oil-related machines from the Netherlands and Germany becomes irrelevant because projects of oil extraction in Arctic and other hard conditions must be delayed or cancelled (same in Canada). Germany, France and the Netherlands will soon meet export fall.  Other commodities, goods/services, countries, regions, the world itself and its economy will be subject to changes through usual mechanisms of trade, cold and hot wars.  So, interesting and dangerous time is coming.
at January 14, 2015 3 comments:

A year and a half ago we presented a description of secular fall in the labor force participation rate, LFPR, measured by the Bureau of Labor Statistics. The LFPR (the portion of people in labor force) for the working age population (16 years of age and over) has been on a long-term decline since 1995. We predicted the fall down to 59% by 2025. Here we revisit this projection and find that our forecast was correct – the rate has decreased by 0.7% (from 64.4% to 62.7%).

Following the Kondratiev wave approach (Russian economist Kondratiev introduced long-period (50 to 60 years) waves in economic evolution – see Figure 1) we interpolated the observed LFPR curve by a sinus function with a period of ~70 years. We added 18 LFPR readings published since July 2013 and show the updated curve in Figure 2. New data follow the predicted curve up.  Figure 3 illustrates the past 15 years. The trough of the model function is expected in 2030 and the bottom rate in 58.5%.

The US economy is in the middle of the 35 years long period with depressed economic conditions. Any recovery can be just transient.  Do not trust good news – the US economy is still stagnating as low GDP growth rate and very low inflation prove. 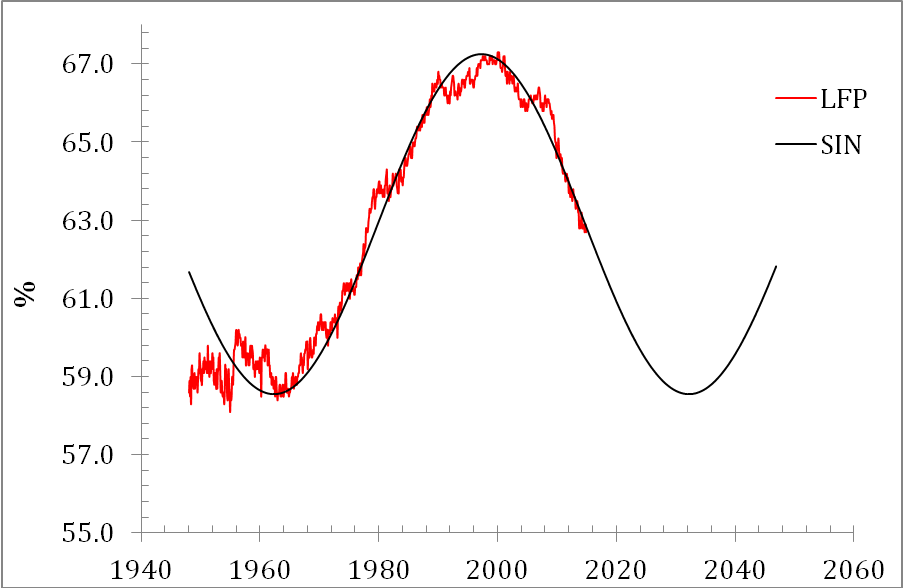 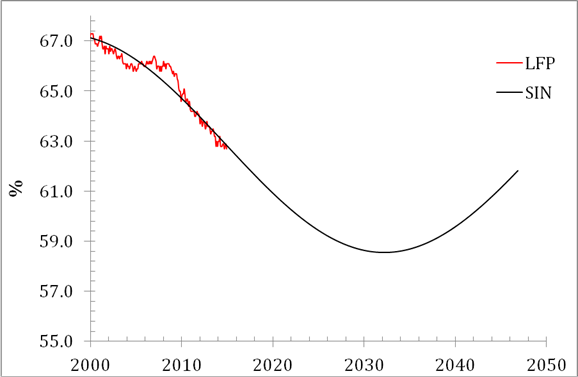