Income inequality is a hot topic for professional economists and lay public. Piketty’s book Capital in the Twenty-First Century (2013) attracts common attention and discusses income distribution between labor and capital. The root concern is related to increasing share of capital income. We made some comments on this topic showing that capital does not eat from the part of labor income but converts corporate income into personal income. Piketty projects some further growth in the proportion of capital income.


Here we present an extremely simple observation which bans any further growth in the capital ‘s share of income. Figure 1 displays the evolution of national income (NI), i.e. the sum of labor and capital income, and personal income (PI), both reported by the Bureau of Economic Analysis.  In the 1970s, the difference was 10% and then stared to decrease. This is the period which Piketty highlights as the era of capital income, i.e. all increase in the share of personal income was appropriated by capital.  Since 2011, there is no room for further growth in the share of capital income – all national income is distributed as personal income. There is no other source of income, except may be decrease in consumption of fixed capital (CFC). There is nothing to share any more.


In 2006, we developed three individual empirical relationships between the rate of unemployment, u(t), price inflation, p(t), and the change rate of labour force, LF(t), in the United States. We also revealed a general relationship balancing all three variables. Since measurement (including definition) errors in all three variables are independent it may so happen that they cancel each other (destructive interference) and the general relationship might have better statistical properties than the individual ones. For the USA, the best fit model for annual estimates was a follows:


where inflation (CPI) leads unemployment by 2.5 years (30 months) and the change in labor force leads by 5 years (60 months). We have already posted on the performance of this model several times.


For the model in this post, we use monthly estimates of the headline CPI, u, and labor force, all reported by the US Bureau of Labor Statistics. The time lags are the same as in (1) but coefficients are different since we use month to month-a-year-ago rates of growth. We have also allowed for changing inflation coefficient. The best fit models for the period after 1978 are as follows:


There is a structural break in 2003 which is needed to fit the predictions and observations in Figure 1. (This break is purely artificial because it was induced by new statistics of labor force and inflation introduced in 2003 by the Bureau of Labor Statistics. The same effect was in 1978, when main definitions of labor force, unemployment, and inflation were revised.) Due to strong fluctuations in monthly estimates of labor force and CPI we have to smooth the predicted curve with MA(24). As a result, the prediction horizon decreases from 30 to 18 months. 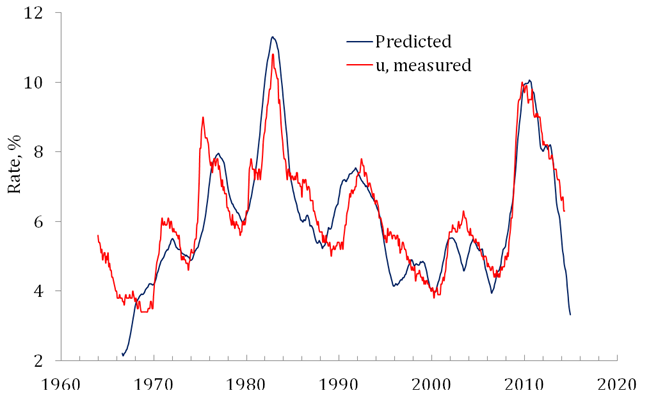 Figure 1. Observed and predicted rate of unemployment in the USA. 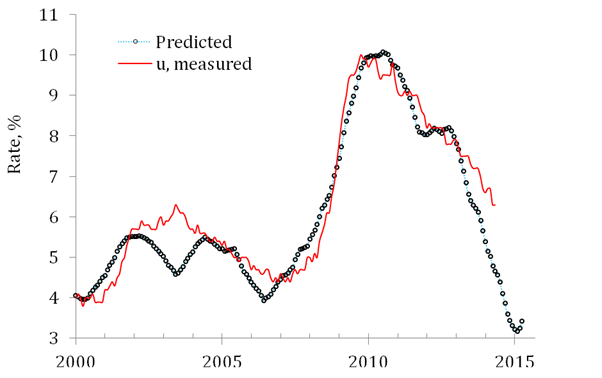