Modeling economic success of Poland and failure in Russia and Ukraine. The 2015 model revision

In 2005, I developed and presented at the Fourth Annual EEFS Conference (Faculty of Economics, University of Coimbra, Portugal 19-22 May 2005) a paper “Modelling the transition from a socialist to capitalist economic system” (Slide Share). An extended and updated version was published in the JAES in 2009.
My model predicts the measured evolution of real GDP per capita and is based on two fundamental physical laws - the decay of socialist system is similar to radioactive decay and the growth of capitalist system is similar to the process of exponential saturation. The predictive power of the model was extremely high even for the realm of physics and accurately described the transition from socialist to capitalist economic system from 1989 (East Europe) and 1991 (Former Soviet Union) to 2003-2007. Ukraine was an excellent example of the model success. Figure 1 shows the observed and predicted curves with the extension to data available in 2016 (we use the Total Economy database from the Conference Board as data source). Two curves are very close between 1991 and 2006.  In 2007, a slight deviation from the predicted curve starts, which then developed in a catastrophic fall in GDP to the level of 0.802 relative to 1991. Essentially, the level of GDP per capita in Ukraine now resides in the earlier 1970s, i.e. half a century in the past.  The predicted curve implies that the rate of growth had to be 3.65% per year (as observed from 1995) and thus had to be in 2015 at 1.84 (relative to 1991).  Missed opportunity.
Russia (Figure 2) presents an intermediate case with a healthy evolution before 2008, recession in 2009-2010, quick recovery and then stagnation at the level of 1.3 relative to 1991 instead of permanent growth at a rate of 3.5% per year. It has to be at 1.8 in 2015.
Poland is likely the best performer between the former socialist countries. Poland fully uses its growth potential –  real GDP per capita grows at a rate of 3% per year since 1991. Our model cannot predict total (Ukraine) or partial (Russia) economic failures, which are likely in tight connection with national and international political turmoil, but our model accurately predicts the evolution of GDP per capita when growth potential is used in full. Poland has been chasing developed countries and it is the best example for Ukraine and Russia (and for other former socialist countries), which are hardly to be able to return to the full growth potential any time soon. The gap between them and developed countries rises at a threatening rate. 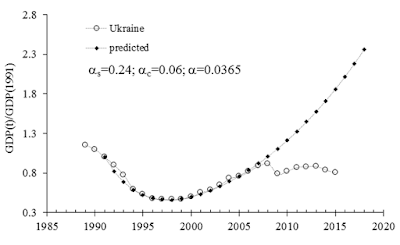 Figure 1. Comparison of the observed and predicted evolution of real GDP per capita in Ukraine. 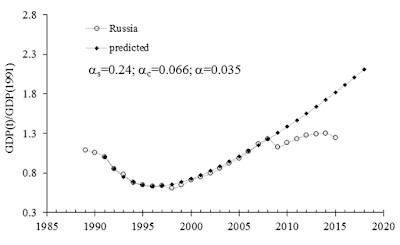 Figure 2. Comparison of the observed and predicted evolution of real GDP per capita in Russia. 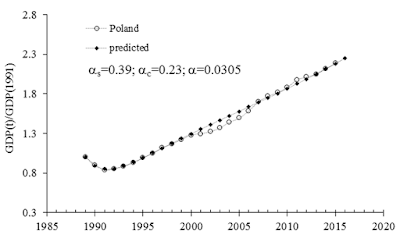 Figure 3. Comparison of the observed and predicted evolution of real GDP per capita in Poland.  The transition started in 1989.

There are some speculations on the effect of  the Russian campaign in Syria on migration in EU.
The EU statistics gives actual numbers to illustrate this effect  - Russia has helped to reduce the monthly rate  of first time asylum applicants. 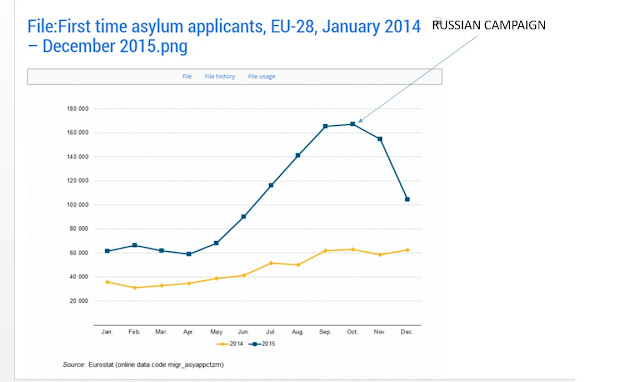