Is it good for a country when population grows fast?

The answer is not easy. Figure 1 show that there is a positive correlation between the total growth in population since 1950 and the total GDP growth (data borrowed from the Total Economic Database run by the Conference Board). The countries with rapidly growing population get higher GDP growth rate. However, when the GDP is replaced with the GDP per capita in Figure 2, the growth in population seems to be a negative factor for personal prosperity. The U.S. does not demonstrate any superiority over any European country except Switzerland. However, we have to take into account that the level of GDP per capita in 1950 was almost the highest in the US and Switzerland.

This is an update of our previous post with an addition of two more months and calculation of the slope of the new trend.
We found sustainable linear trends in the difference between the headline and core CPI in 2007. We also were the first to suggest that the linear trend between 2002 and 2008 to be reversed to the opposite after an extended period of strong fluctuations. These findings are currently validated by six years of observations – the studied difference is on a sustainable linear trend since the middle of 2011. When extended into the second part of the 2010s, this trend implies that the joint consumer price of food and energy will be falling against other consumer goods and services in the headline CPI.  (Figure 4 is an update, which demonstrates the slope of the new linear trend is similar to that between 1987 and 1999.)
We have been routinely reporting on the difference between the headline and core CPI since 2008. Figure 1 illustrates our general finding that this deference can be well approximated be a set of linear trends. The last trend likely finished in 2009. That’s why we expected a new trend to evolve since 2011 into the late 2010s.
The U.S. Bureau of Labor Statistics has reported the estimates of various consumer price indices for December 2013. Figure 2 shows the predicted trend and the actual difference since 2002. The studied difference has been fluctuating around the zero line between in 2009 and 2011 and then showed a turn to the early predicted trend (Figure 3).  Essentially, the zero difference suggests that the core and headline CPI are practically equal and evolve at the same monthly rate, i.e. the joint price index of energy and food has been following the price index of all other good and services (the core CPI) one-to-one.  Figure 4 shows that the new trend has finally stabilized and the observed difference between the core and headline CPI (normalized to the headline CPI) demonstrates no large deviations from this trend. The slope of 0.0021 per year is similar to that observed between 1987 and 1999. This is a good indicator that the next 10 years the difference will follow the current trend, i.e. the core CPI will grow at a lower rate that the other CPI components.

Figure 1. Two trends in the difference between the headline and core CPI.

Figure 2. The evolution of the difference between the core and headline CPI since 2002.

Figure 3. The evolution of the difference between the core and headline CPI since 2010.

Here we show that the source of increasing income inequality in the tax law. At the end of the day, the whole bunch of US politicians is responsible for the increase in the portion of personal income for the richest families. This is good news since the return to “normal” income distribution is a political procedure. There are no economic forces behind the change, which would be much more difficult to overcome.


We have discussed the evolution of inequality   in the USA a few times in this blog and demonstrated that the proportion of personal (money) income in the Gross Domestic Product has not been changing much since 1947. This is the year when the Bureau of Labor Statistics started to measure personal incomes. We have also revealed the source of some kind of virtual increase in income inequality – private companies redistribute their income in favor of personal income of their owners. The question is – how do they get extra money to redistribute to their private owners? This post answers this question - the US tax system started to reduce the level of tax for private companies. Primarily, it is made by increasing the rate of depreciation, which enterprises are officially permitted to charge for tax purposes (usually fixed by law).  Hence, the tax law in responsible for the increasing inequality.


We start with a graph showing the growth in GDP, gross personal income (GPI) and compensation of employees (paid) since 1929. Figure 1 demonstrates that the level of GPI has been rising faster than that of the GDP (and the compensation) since 1979. (The share of GPI in the GDP has been rising since 1979!) The difference between the GPI and GDP curves depicted in Figure 2 has a striking kink around 1979. And this is the start of the current rally in the rich families’ personal income. In other words, a new political (taxation is a fully political issue) era started in 1979. We would like to stress again the proportion of the compensation of employees in the GDP has not been changing since 1929, with a small positive deviation in the end of 1990s and a negative deviation since 2009.  This observation supports our previous finding that the proportion of personal (money) income in the GDP has not been changing.


So, where the extra money is from? The level of personal income has been actually increasing faster than that of the GDP and it should be a looser, which lost its share in the GDP.  Figure 3 shows two major components of the GPI. The net operating surplus (private) has been changing at the same rate as the GDP since 1929, while the proportion of taxes on production and imports has been growing at lower rate since 1980. We have allocated the source of income for rich families. They take money from the decreasing taxes. But what is the mechanism of money appropriation? Figure 4 demonstrates that the decrease in taxes goes directly into the increasing share of consumption of fixed capital. This is the force behind the increasing income inequality.  The increasing share of the consumption of fixed capital is successfully converted in private money, not in investments! This is a political problem started likely started by Reagan.
There is no economic problem behind increasing income inequality.

Figure 1. GDP, GPI, and compensation of employees normalized to their respective levels in 1960.

Figure 2. The difference between the GPI and GDP curves in Figure 1.

Figure 3. GDP, net operation surplus (private), and taxes (on production and imports) normalized to their respective levels in 1960.

Figure 4. GDP and consumption of fixed capital normalized to their respective levels in 1960.
at February 15, 2014 3 comments:

Expecting the "Employment Situation" release - will the rate of unemployment fall below 6.5%

A few hours before the BLS releases the “Employment Situation” for January 2014 we revise our prediction and estimate the expected value of unemployment rate below 6.5%. The rate of unemployment in December 2013 is 6.7%. In 2014, this rate should fall down to 4% and even lower in 2015. For details of our model, see our previous post. Here we just update two figures with predicted and measured values. It is worth noting that our model predicts 2 years ahead. The accuracy of prediction is excellent. 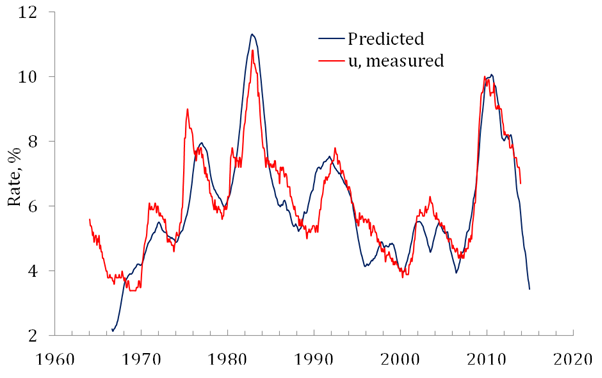 Figure 1. Observed and predicted rate of unemployment in the USA. The predicted curve leads the observed one by 2 years. 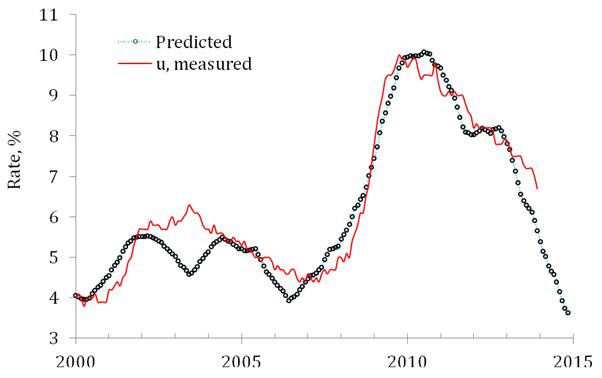