Six years ago we first reported on the presence of sustainable trends in the difference between various components of PPI [1]. Figure 1 illustrates the concept by highlighting two quasi-linear trends in the difference between the overall PPI and the core PPI, i.e. the PPI less food and energy. Both indices are not seasonally adjusted ones and represent finished goods (http://www.bls.gov/data/). We predicted that the trend observed between 2001 and 2008 had to come to end. A new trend had to develop and to define the prices of commodities in the 2010s. This new trend was expected to have a positive slope, i.e. the price indices of energy and food should grow at a lower rate than those for other commodities.


Figure 1 displays the time history of the difference and two slopes of the relevant trends. Between 1980 and 2000, the difference was growing at a rate of 0.79 per year. Between 2001 and 2008, the difference fell at a rate of 3.4 units of index per year. Since 2008, this trend, which was reigning between 2001 and 2008, started to fade away and a new trend have been emerging. This period is characterized by very high volatility. The fall in the difference observed in 2008 was followed by a positive spike in 2009 and again by a fall in 2010. In 2011, the difference stabilized and has been following the expected trend ever since. This is the pattern we accurately foresaw in 2008.
The concept of sustainable trends allows predicting the future evolution of the difference. The new trend is likely defined. Figure 2 depicts the period after 2000 and highlights the new trend with a slope 0.77 units of index per year. This slope is the same as between 1980 and 2000. Initially we put forward two naïve assumptions that the new trend has to repeat the previous one with a positive sign or the one between 1980 and 2000. The latter hypothesis is likely right. 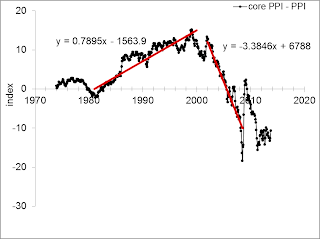