We observe the time of actual liberal thinking in action in western countries. The power of liberalism is tremendous and is used for changing this world into a new state. For a conservative, any current state is a value to fight for. According to J.Haidt, there are values like sanctity (power of divinity), authority (power of experience), and loyalty (power of group work or coalition), which attract conservatives more than liberals.  Essentially, these values define the difference between conservatives and liberals. Fairness and care are the only two values attracting liberal minds. It is strange but statistically Liberty as a moral foundation belongs to both groups equally.

The practical liberalism we observe now gives us experimental material to project the future of the society if it will be progressing along the liberal avenue. First of all, it is clear that liberalism is very inventive in defining fairness and care conditions with any outlier to be considered as an object of fairness and case with the interest inversely proportional to its abundance. The number of outlier cases is diminishing accordingly as liberal activists work hard and this makes the future of liberal thinking to be grim. If they stop finding new objects for case and fairness they become conservatives defending the current state of society. When a liberal will say " top here" a more liberal person has to blame this liberal as a conservative. This process is endless. I guess that the next step will be to define some parts of human bodies as independent entities. This process can go down to elementary particles and quantum states in accordance with Penrose's ideas. This would be the end of liberalism and the Conservative Kingdom will reign forever.

The discussion on the reasons behind and responsibilities for the price inflation in the USA can be illustrated in one graph in Figure 1 - the ratio of personal income and GDP as measured by the Bureau of Economic Analysis. The COVID-driven extra money supply or so-called "helicopter money" (Bernanke loved this idea) was not connected to any economic activity. The ratio in Figure 1 below demonstrates that the share of PI was 105% in 2020Q2 with a long-term average of 85%.  This is 20% of GDP which were not a usual component of the Gross Domestic Product, i.e. 20% of helicopter money/ One can call this money a direct dollar devaluation. The price reaction is clear - the whole set of goods and services just jumped to the new price of the dollar to equalize supply and the new demand.

In 2022Q1, one can see that the PI/GDP ratio is back to the long-term trend and no helicopter money is left in the economy, but the prices now include the helicopter money at the new PI level of around 100% of the GDP. There is a time delay of approximately 1.5 years between money injection into the economy and price increase. In Figure 2, the PI/GDP ratio is synchronized with the CPI inflation rate scaled to the PI/GDP level in order to stress the coherent evolution. Inflation represents the integral change in helicopter money. In the second half of 2021 and in 2022, we observe an abrupt decrease in the money supply  (such an artificial surge in money supply has never been observed in the past in the USA) will induce an abrupt price fall in the near future - deflation. A new portion of helicopter money is the remedy to avoid deflation now. But the deflationary potential is increasing proportionally.

Figure 2. The current CPI (blue dots) delays by approximately 1.5 years behind the money injection. The shifted CPI (red dots) is synchronized with the money injection as expressed by the PI.  In the near future (likely in 2022Q4 or 2023Q1), the CPI will fall below the zero line.

All dollars will be lost in time, like tears in rain. Time to die.

The Russian money frozen in the US, Europe, Japan .... was real before this action took place. This action actually revealed a frightening reality - money does not exist. There exist an "agreement" to consider some electronic records or pieces of paper as payment mean. This agreement is supported by power - the power or crude force. This power can print any amount of "money" dissolving the essence of this term. We are moving back to the physical exchange of goods and services. Dollars will be lost in time ...

Inflation in the USA: GDP deflator in details

The most recent GDP estimates showed a 1.4 percent real GDP decline in 2022Q1. The real GDP estimate is the nominal GDP less GDP deflator, dGDP. The latter is inflation of the GDP-wide basket of goods and services. The GDP deflator is different from the CPI since late 1970 when the GDP obtained new features not included in the CPI. Figure 1 compares the CPI and dGDP cumulative inflation since 1971. The deviation of the CPI and dGDP can be well predicted by a simple linear relationship: CPI = 1.26*dGDP after 1979, and Figure 2 compares the original CPI and the corrected dGDP. The coincidence is fascinating. The CPI is dGDP times 1.26 since 1979 with small deviations at the level of the measurement error. 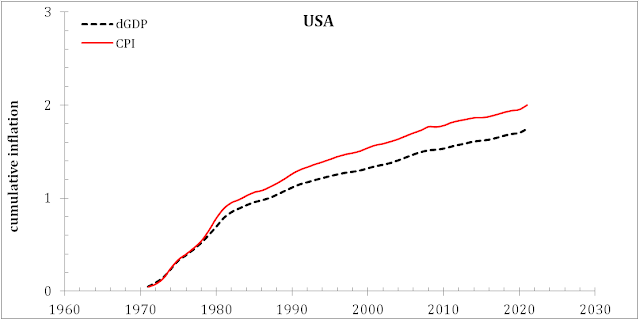 Figure 1. Comparison of the CPI and dGRP cumulative inflation curves 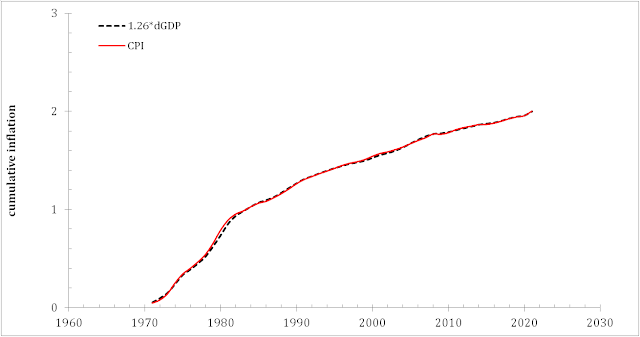 Figure 2. CPI and corrected dGDP
Figure 3 presents the quarterly CPI and dGDP estimates since 2000. In 2022Q1, the Percent Change From Preceding Period in Prices for CPI and Gross Domestic Product is 8.9% and 8.0%, respectively. We have discussed the CPI estimates previously. 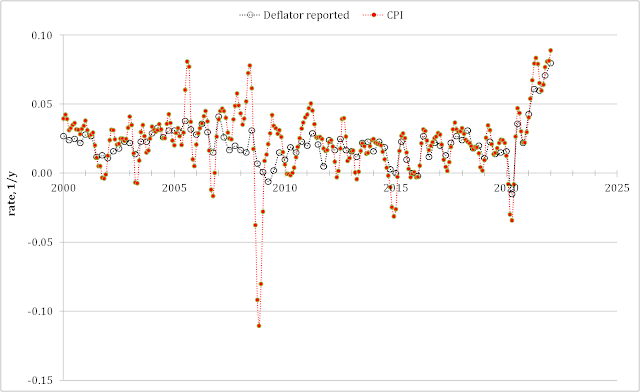 Figure 3. Quarterly CPI and dGDP deflators
Here we present the dGDP components without special discussion. Figure 4 shows inflation in the dGDP of personal consumption expenditures, PCE. In 2022Q1, PCE inflation was 7.0%. This value is the current peak in the steep inflation growth period observed since 2020Q3.  One can expect a further increase in the PCE inflation.

Gross private domestic investment, GPDI, in Figure 7 is an important component of the GDP with 9.6% rate of inflation in 2022Q1. The largest inflation rate of 17.8% among the GPDI component is related to Residential investment in Figure 8. It has some potential for further growth.

Figure 8. Residential investment
Finally (imports-exports ignored), the rate of inflation in Government consumption expenditures and gross investment reached 9.1% in 2022Q1 as Figure 9 presents. This value is just slightly higher than that related to the whole GDP. 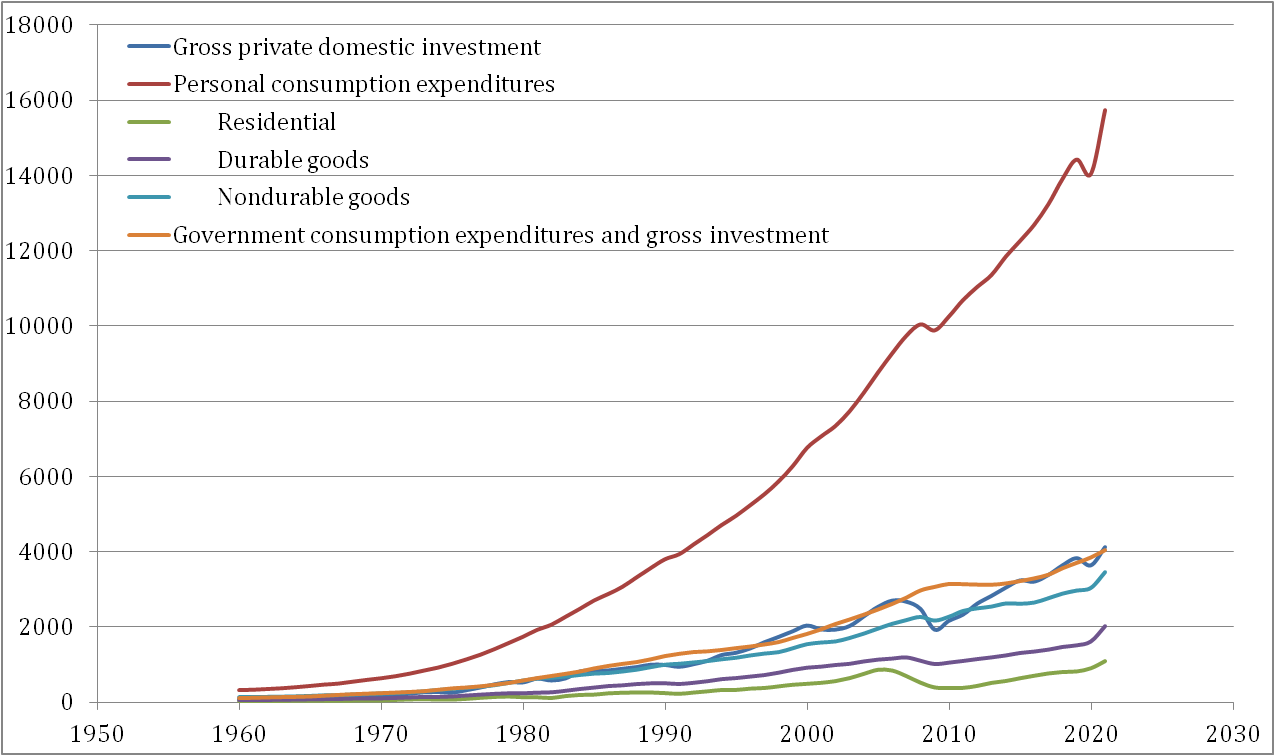 Figure 10. Components of the GDP presented in this post. Scale in billions of dollars.

After a few days of strong wind in the UK (and this is strange for an island), the weather is back to no-wind condition. The figure below shows the current status of electricity production split between green and fossil sources. No good news for green energy. This is a good reason for the future natural gas price surge. Considering the possibility of the reduced gas supply from Russia, the european natural gas market is vulnerable. 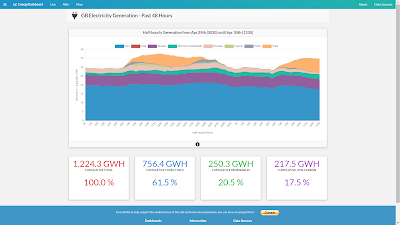 To rouble or not to rouble?

The time is coming when European countries have to pay for natural gas from Russia received in April. The new mechanism requires a euro/rouble exchange in Russia. The tension is growing and the most dependent on the Russian gas supply countries have to mitigate the risks of the gas absence on a one-year horizon - time to fill underground storage. Some countries try to talk to Putin. For example, the Austrian Chancellor Nehammer visited Moscow in a desperate attempt to fix the problem masking it with the discussion on Ukraine. Austria has a very poor position in the center of Europe and any gas supply except Russia will leave it without gas in the case of an overall shortage. LPG comes by sea and thus Austria has no influence on this supply chain.  Gas from Norway and Algeria passes so many countries that the case of COVID-19 vaccine supply just a year ago is still a painful story.

There are European countries rejecting even the idea of euro/rouble exchange. They are going to pay in euros risking initiating the "Force Majeure" clause in the contracts. Euro and dollar have no value in Russia anymore and this type of currency exchange in Russia has large difficulties - there is no euro and dollar demand at all. It is hard to get roubles since the euro is not a currency. This makes the mechanism proposed by Putin likely available only on a "the first to come" basis. The second to come may have nothing instead of natural gas. Then the gas demand will spike and even a small amount of gas will cost more than now. Russia will get money anyway.

The choice is: To rouble or not to rouble?

March 2022 was a successful month for consumer price inflation in the USA - 8.5% for the overall consumer price index, CPI. This is a result of pumping money into the US economy started two years ago. Trillions of dollars are now seen in the prices and the most aggressive growth was observed in consumer energy - 32% and food - 8.8%. Other expenditure categories demonstrate lower than average growth. Effectively, poor people are more prone to the energy and food components of the overall CPI growth since their budgets have larger shares of these two components. For them, inflation is much larger. Interestingly, the medical care price grew by 2.9% between March 2021 and March 2022. It seems that the linear growth of the medical price is still underway. Medicine does not depend on the economic state - it is decoupled from any perturbations in the real economy.

We observe the time of actual liberal thinking in action in western countries. The power of liberalism is tremendous and is used for changin...