We have presented dozens of real GDP per capita graphs using the Maddison Project Database in the previous posts. We fully trust the professionalism of the MPD team and their GDPpc estimates. They use raw data, however, which might be biased overall and specifically for our study. First of all, when we say "per capita" or "per head" what do we mean specifically - the total population, working-age population, or the population in the labor force? The main question is: Who is driving the real economy? When modeling real economic growth in mainstream economics, the GDP per capita is using the working-age population (not the values published in the MPD). There are several reasons for this approach. Two of them are: 1) children do not work and do not produce goods and services; 2) Children do not have income; at least their incomes are not determined in the annual Current Population Surveys and decennial censuses.

The importance of the difference between the total and working-age population is illustrated in Figure 1 with the USA and Mexico as examples. Mexico had a larger portion of children between 1960 and 1980 and then the USA took the lead. It is not excluded that the growth in the portion of Hispanic and Latino Americans due to migration to the USA assisted the elevated birth rate. The correction for the difference between the total and working-age population is an interesting option to be exercised in any case. One could expect that the overall data consistency has to be improved. On the other hand, there are countries with official and non-official migration. The share of such people in the workforce may vary from country to country. For example, Qatar uses more than 2 million foreign workers. 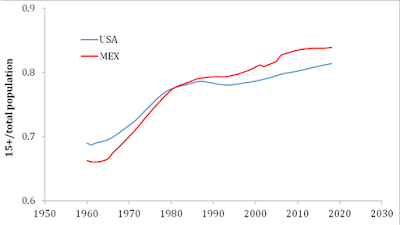 Figure 1. The evolution of the working-age and total population ratio in the USA and Mexico since 1960.

The "per capita" definition is crucial for our study, but the real GDP definition is also important. One can be surprised that the real GDP cannot be measured as such. Instead, nominal GDP and GDP deflator are used to estimate the real GDP. The GDP deflator is a tricky variable, which includes direct measurements of a real price change and an estimate of the price change for new goods and services as well as the goods and services changing their own quality and capability (e.g. computers). Moreover, there are new items included in the nominal GDP estimates (e.g. imputed rent). All these aspects in the estimation of real (and nominal) GDP are well described and reported by national agencies (e.g., BEA). As a result, one can often see a striking comment that the GDP estimates are not compatible over time.

As one can see, this is an extremely difficult problem to reconstruct the real GDP time series, and then harmonize them between various countries. We are not going to solve such a difficult problem and leave this work to the Maddison Project team. There is one important problem, however, which we are able to address in this study - the change in calculations of the CPI and GDP deflator (dGPD).  We have reported this problem in 2016. Figure 2 presents two curves in the USA - dGDP and CPI time series normalized to their values in 1929, i.e. these curves present the cumulative price growth since 1929. In many economic minds, the CPI and dGDP are almost equivalent. The data show a quite different picture - the curves start to diverge in 1979 (a new definition of GDP was introduced). Since the dGDP and CPI was the same before 1979 and then started to diverge due to the definition change one has to apply the same definition of inflation to the whole series. Otherwise, the real GDP in the USA is overestimated since 1979 since the dGDP is underestimated relative to the CPI used before 1979. For the GDPpc estimates in this study, the dramatic change in the definition of inflation might change the long term trends and the model of inertial growth.

Figure 2. The CPI and dGDP cumulative inflation in the USA since 1929. Two curves start to diverge in 1979.

The effect of the inflation change in the USA is illustrated in Figure 3. We have corrected the portion of the GDPpc after 1979 to the ratio of the dGDP and CPI. This effectively allows using the CPI time series as inflation in the real GDP estimates. One can also use the same dGDP definition before 1979, as shown in Figure 4,. This is a simple procedure since the ratio of CPI and dGDP is 1.2 since 1979. We take the same ratio and extend the corrected dGDP time series into the past.

In Figure 2, one can see that the deviation from the linear regression line observed after 1979 completely disappear. In other words, the GDP per capita in the USA is biased in favor of better real economic growth, which is actually just a statistical trick. Unfortunately, this nasty trick is used by other developed countries. More work on the way to true GDP growth estimates is needed.

Figure 3. Real GDP per capita in the USA corrected for the difference between the CPI and dGDP in Figure 2. 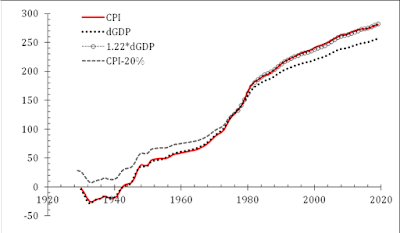 Figure 4. The extension of the dGDP definition into the past. The dGDP is taken as CPI-20% before 1979.