Oil price will not grow during the next 15 years

In 2008, we published a paper on the presence of long-term sustainable trends in the differences between various components of the CPI in the USA. We started with the difference between the core CPI (i.e. CPI less food and energy) and the overall CPI. Two Figures below are borrowed from the paper: 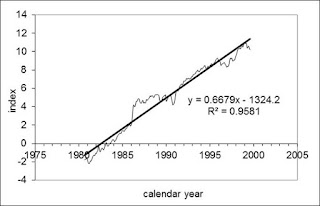 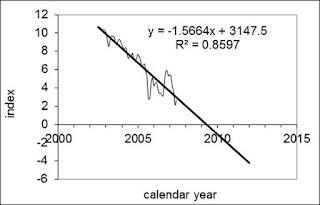 Figure 2. Linear regression of the difference between the core CPI and CPI after 2002.  The goodness-of-fit is 0.86, and the tangent is -1.57.  An elevated volatility has been observed from 2005.

In this eight-year-old paper as well as in later papers on the sustainable trends in the CPI and PPI (see here), we suggested that the negative trend shown in Figure 2 should reach some bottom point and then turn to a positive trend. It was also mentioned that such processes in the past had been accompanied by an elevated volatility in the difference, i.e. high amplitude fluctuations.
Eight years later, we are happy to state that our predictions were accurate - the trend now positive and is likely approaching the mid-point of the linear segment. Since the very beginning, we have been reporting on the evolution of the difference between the headline CPI and core CPI many times.
Our concept of cyclic evolution was formulated in 2007. Essentially, this concept says that the future trajectory has to repeat the path observed thirty years ago, i.e. the cycle has a 30 years period. Figure 3 presents the state of the CPI difference normalized to the headline CPI as observed since the late 1950s (dotted red line) and the predicted trajectory (blue dotted line), which is the current curve shifted by 30 years ahead. Figure 4 presents corresponding linear trends with all volatile periods removed.
We can say that eight years ago we successfully predicted the era of low energy+food prices (core CPI is the headline CPI less food and energy) since 2014 and for the following 20 years. For energy companies, Figure 4 implies that oil/energy prices will be on a negative trend until 2030. We are just in the middle of the fall, which is supposed to be dramatic in the next two to four years. All measured taken by oil-producing countries are worthless  -

Figure 3. The difference between core (cCPI) and headline (CPI) CPI normalized to CPI. The period of cycle is 30 years and dotted  blue line presents the future of the normalized difference before 2044.

Figure 4. The current state of our prediction. Red line follows up the blue line.