Food is getting cheaper

This is an annual update. We continue reporting on and predicting the evolution of the difference between the core consumer price index (CPI) and the index for food (less beverages).  Previously, we confirmed in many posts (see this blog) and papers [1, 2] that this difference had been following a long-term negative and linear (time) trend since 2001.  Originally, we predicted a turn to a positive trend in 2014. Two years ago, we expected the turn to a positive trend in 2012. Currently, we have new estimates of the core and food CPI through October 2013and can re-estimate the duration of the negative trend and its bottom value. For an investor dealing with commodities, the index of food, which continues to grow at a rate higher than the core CPI, is an important reference for any action. Food price affects not only economic but also social and political processes.


Figure 1 depict the most recent period. In 2008, when we first addressed the issue of sustainable trends in CPIs, the trend line was much steeper than now and intersected the zero line in 2014.  This was our initial estimate of the turning point for the negative trend. The zero line was considered as a natural level of resistance.  In the beginning of 2009, the difference reached the bottom and turned to a positive one, although not for long. The growth in food prices restarted in 2010. In the end of 2011, the difference had a short stop which we likely misinterpreted as a manifestation of the transition to a positive trend. Since October 2011, the difference has not been changing much with just a slight positive trend. This segment might manifest the major turn to the overall food price fall.


There are three possibilities of the future evolution. Firstly, we consider the probability of the turning point in 2013-2014 to be high.  Secondly, it is not excluded that the difference may suffer a further slight fall before it reaches its absolute historical minimum observed in 1979. Figure 2 illustrates this assumption and implies that with the current values at the level -3.0 and the bottom was at -8.5. Thirdly, the bottom value may be expressed in relative values. Figure 3 displays the difference between the core and food CPI normalized to the core CPI. In relative terms, the minimum was in 1974 and much deeper than in absolute terms. Falling along the current trend the normalized difference will reach the bottom only in the 2020s. This is the worst case scenario involving a significant rise in food prices through the 2010s. 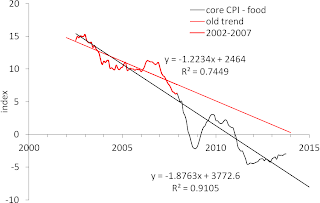 Figure 1. The difference between the core CPI and the price index of food since 2002. 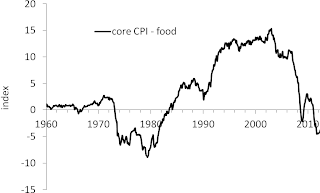 Figure 2. The difference between the core CPI and the price index of food between 1960 and October 2013. 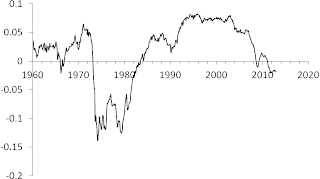 Figure 3. The difference between the core CPI and the price index of food normalized to the core CPI. 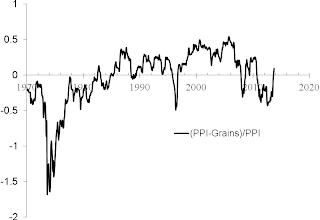 Figure 4. The difference between the PPI and PPI of grains normalized to the PPI. The PPI of grains rapidly falls relative to the PPI since August 2012.
at November 30, 2013

The current escalation of the conflict on the Russian border looks like a game of nerves. Russia has declared an existential threat and is r...