On some methodical mistakes in the presentation of income inequality

Uwe Reinhardt onEconomix has posted on economic inequality. He presented Figure 1 illustrating the growth in income inequality in the U.S. since 1975. (All original data were taken from the Economic Report of the President to the Congress. These data sets are provided by the US Census Bureau (CB) and the Bureau of Economic Analysis (BEA).) 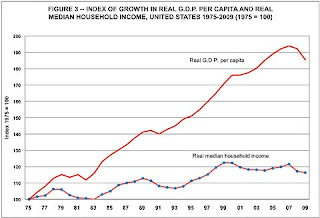 Figure 1.
So, Figure 1 has to prove that the income distribution in the US has been experiencing significant changes since 1975 and the level of economic inequality has increased dramatically.  The problem is that Figure 1, containing the change in real GDP per capita (borrowed from BEA) and the evolution of real median household income (borrowed from CB), does not prove any change in inequality. There are two mistakes. First, one should not mix household and personal incomes in one plot. The structure of households in the US is subject to severe changes. At the same time, real GDP per capita can is related to the smallest possible economic agent and is not subject to changes in structure. Secondly, the deviation between median income and real GDP per capita results not from the change in income inequality but from real economic growth. We demonstrate both effects below.
Figure 2 displays the evolution mean and median personal and household incomes and that of real GDP per capita as reported by the US Census Bureau. One can see that mean and median incomes for both persons and households do deviate since 1975. It is a crucial fact that all data sets in Figure 2, except GDP, are taken from the same source – the Current Population Surveys Annual Social and Economic Supplements conducted every March.  All variables are measured together during the same surveys from the same households. Figure 3 depicts the corresponding estimates of Gini ratio for both personal and household income distribution. It is clear that the personal Gini ratio has been decreasing since 1994 (no CB’s estimates before 1994), while the household Gini ratio has been experiencing a steady growth. Hence, the deviation between mean and median income does not necessarily proves the growth in economic inequality, at least as expressed by the Gini ratio.

Figure 2. The evolution of mean and median personal and household incomes and that of real GDP per capita, all normalized to 1975.

Figure 3. Gini ratio for personal and household income distributions.
The difference in Gini ratios in Figure 3 also demonstrates the changes in the structure of households.  The distribution of personal incomes practically does not change over time with the Gini ratio slightly falling since 1994. The corresponding households, which consist of the same persons as used in the personal income distribution, does experience tangible changes as expressed by the growth in income inequality. Thus, one must never use real GDP per capita and real median household income in the same plot. These variables are different by nature and their comparison is intrinsically biased.
In turn, the deviation between median personal income and real GDP per capita in Figure 2 does not imply any inequality change, as least as measured by the US Census Bureau.  The mean personal income can be a good proxy to the real GDP per capita. Figure 4 shows the ratio of the GDP per capita and the mean income. This ratio also depends on the difference between the total population used for the GDP per capita estimates and the people with income used for the mean income estimates.

Figure 4. Per capita GDP divided by the mean personal income in Figure 2.
at September 06, 2011

Email ThisBlogThis!Share to TwitterShare to FacebookShare to Pinterest
Labels: inequality