In 2005, we published a paper quantitatively describing the transition of the former socialist countries to a new state similar to capitalism.  In 2009, we extended our model and predicted the evolution of real GDP per capita in 27 countries, including two virtual countries: the U.S.S.R and Czechoslovakia. Briefly, despite different social, cultural, ethnical, racial, demographical, religious, and technological histories our model demonstrates general success in the overall prediction between the start point (1989 to 1991) and the year of 2006(7). In all cases, the most accurate prediction is associated with the initial segment of the transition, when socialism was dynamically replaced by capitalism. The initial stage is characterized by the largest changes in the GDP per capita, and thus, provides a wide dynamic range as a crucial condition for accurate modelling.

At later stages, some exogenous forces, such as economic recession, might disturb the agreement between measured and predicted GDP, and introduce some bias in the estimation of the defining parameters. This later stage, however, is of lower relevance to the transition itself and rather demonstrates the behavior of a regular capitalist economy.

Here, we revisit our old predictions and compare them with actual observations with the real GDP per capita estimates borrowed from the Maddison Project Database. In 2009, we concluded that the transition process has effectively finished in Central and East European countries. Thus, the long-term growth rate of GDP per capita in these countries is limited by the attained level of the GDP per capita, as in developed countries (see this post). Any deviations from the long-term rate can be explained only by inefficient economic performance. In fact, many developed countries are characterized by lower values of an economic trend than that in the U.S. at the same level of GDP per capita. We assume that the future economic growth in the FSC will follow either the potential or current value of the annual GDPpc increment. When no inefficiency is allowed, the best-case scenario of economic growth is realized.

Figure 1 displays Figure 10 from the 2009 paper - the past and future evolution in Hungary and Poland compared to that the U.S. All other FSC have time histories similar to those in Hungary and Poland, but with different initial values and actual slopes. In the current study, all theoretical slopes are equal: A=$370, i.e. annual increment in GDP per capita is $370 (1990 $).

The U.S. theoretical curve with A=$370 is much higher. Before 2008, it had no prominent horizontal or downward segments, as observed in Hungary and Poland. In 2008, the recession moved the US GDPpc curve down and it was below the theoretical curve as Figure 2 shows. In Poland, the stagnation process started in the late 1970s. Hungary is characterized by a shorter period of weak performance. Apparently, the years between 1950 and 1989 are characterized by a lower rate of economic growth with an increasing gap between the FSC and the U.S. The best-case scenario would allow maintaining a constant lag behind the U.S., X. In relative terms, the lag will decrease as a function GFSC/(X+GFSC), where GFSC is the GDP per capita in a given FSC.

Figure 2 compares the predicted and observed GDPpc curves in Hungary. The MPD data (2011 prices) are used instead of the TED. All MPD readings are reduced to 1990$. The drop in the US curve was observed in 2008. The upper panel of Figure 2 shows the 2016 revision with TED data and the lower panel uses the MPD data. There is some discrepancy in the GDP per capita estimates in 2016 and 2020. The observations show that the economic performance in Hungary has been approaching its perfect trajectory with A=$370 (1990$) since 2012. Figure 3 presents the case of Poland, which shows a better performance likely related to the EU financial support. Figure 4 is for Bulgaria.

Overall, our prediction is still valid – the new EU countries lag behind the US and this lag will not be closed any time soon. 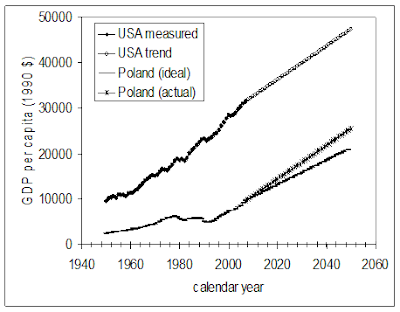 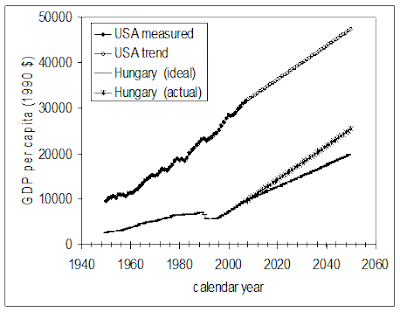 Figure 1. Upper panel: The evolution of per capita GDP in Hungary compared to that in the U.S. The gap between countries has been increasing since the ideal case, when Hungary performs at the theoretical level (A=$370), it will be able to retain the gap. The absolute gap between the U.S. and Hungary can theoretically be constant at the level of $22,000 in the future. Lower panel:  Same as in the upper panel for Poland. The absolute gap between the U.S. and Poland is currently $22,300. 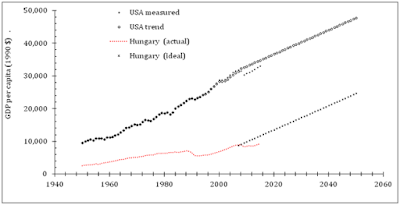 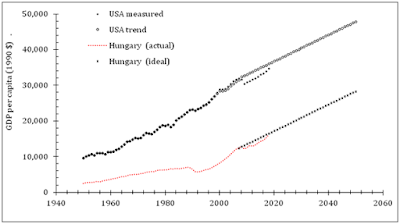 Figure 2. Comparison of predicted and observed GDPpc curves in Hungary. The MPD data (2011 prices) are reduced to 1990$. The drop in the US curve was observed in 2008. The upper panel shows the 2016 revision with TED data and the lower panel uses the MPD data. There is some discrepancy in the GDP per capita estimates in 2016 and 2020. The observations show that the economic performance in Hungary has been approaching its perfect trajectory since 2012. 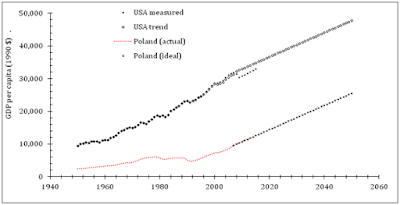 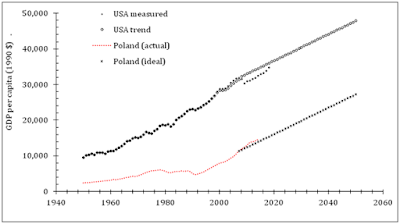 Figure 3. Same as in Figure 2 for Poland 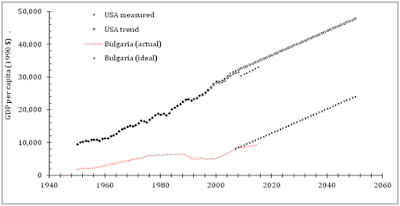 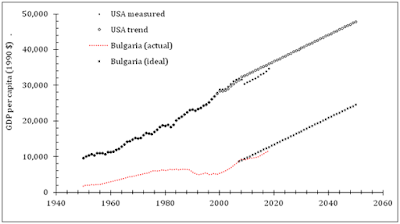