The link between unemployment and real economic growth in the UK. Brits are able to retain data quality and integrity

In 2011, we published a paper modeling the link between the annual change in employment rate and the change rate in the real GDP per capita. This paper also included modeling of a similar link for unemployment.  In 2011, we used data from various sources – the OECD, BEA, BLS, and the Total Economy Database of the Conference Board. Because of the data availability, the period under consideration varied between countries and the longest time series started between 1950 and 1960. For many developed economies, however, the start year was 1970. Since the studied period was limited to 2010, we promised to revisit all published models and validate the original versions. In the beginning of 2021, we have new estimates of the involved parameters between 2010 and 2019 and re-estimate the unemployment models. In this post, we revise the model for the United Kingdom.

As in hard sciences, the standard modeling procedure is to check data quality. As we learned before, the GDP deflator (dGDP), which is a principal component of the real GDP estimation procedure, is prone to artificial breaks induced by definitional revisions. Such breaks in the GDP time series look like the structural breaks related to inherent changes in economic performance.  When taken as real, the definitional breaks ruin the statistical performance of the mainstream economic models.

The UK has likely the most developed school in hard and soft sciences. Data quality is the essence of experimental sciences in support to theoretical consideration. Economics is not an exception and the quality and compatibility of measurements is generally retained. In panel a) of Figure 1, we present the evolution of the cumulative inflation (the sum of annual inflation rates) as defined by the CPI and dGDP between 1955 and 2018. Both variables are normalized to their respective values in 1955, and thus the curves start from 1.0. One can see that the curves are close, but deviate from the very beginning.  In panel b), the rates of price inflation are shown as calculated using the CPI and dGDP indices. The only large deviation between the inflation curves was in 1994 and is likely artificial (corresponding documentation may describe the reasons behind the spike, but its nature is not important for this post). This spike is pretending to be described with a dummy variable, which we did not use in the previous models.

Panel d) illustrates the match between the cumulative curves, which include a dummy variable of -0.049 in 1994. The spike is removed. The model residual is presented in panel e), where the standard deviation is 0.018 for the period between 1957 and 2018. The CPI and dGDP comparison indicates that there are potential breaks in the dGDP curve in the early1970s, the late 1980s, and likely between 2009 and 2012. 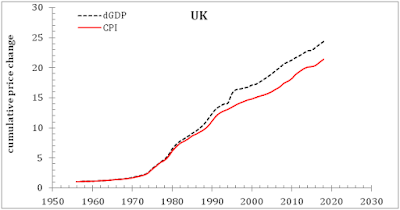 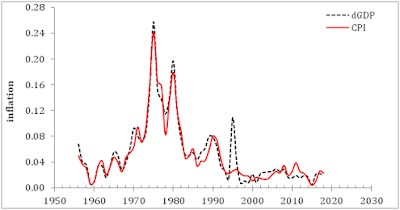 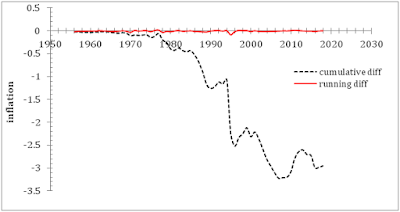 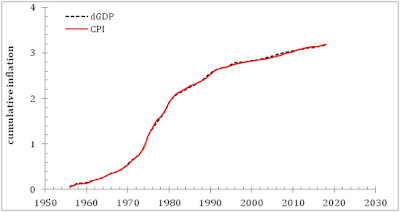 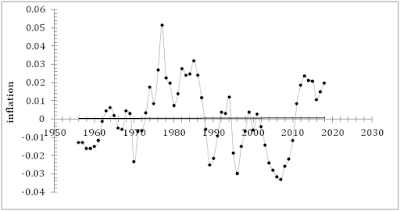 The break years obtained from the dGDP are used as start points for the search of the best fit in our version of Okun’s law for the UK. We are using the standard LSQR procedure to estimate a new set of coefficients for the period between 1963 and 2018. The data before 1963 are not used because the rate of inflation is very close to 1%, and is difficult to model. The preliminary analysis gives the following model:

Figure 2 illustrates the model predictive power. In the upper panel, the measured rate of unemployment in the UK between 1963 and 2018 is compared with the rate predicted by model (2) with the real GDP per capita published by the Maddison Project Database. The rate of unemployment is borrowed from the OECD. In the middle panel, the model residual errors are presented with the standard deviation of 0.91% and the mean unemployment rate of 5.99%. The lower panel depicts the linear regression of the measured and predicted time series with Rsq.=0.91. Hence, the new set of coefficients provides and an excellent match between the measured and predicted values, i.e. the model linking the change in the unemployment rate and the change in real GDP per capita. The UK is able to retain the integrity of data in longer time periods. The overall sensitivity of unemployment to real GDP per capita seems to decrease with time. This decrease is likely artificial as if one implicitly jumps from Fahrenheit to Celsius degrees and gets cooler weather. 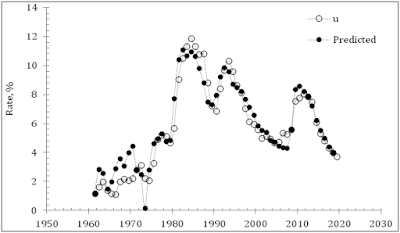 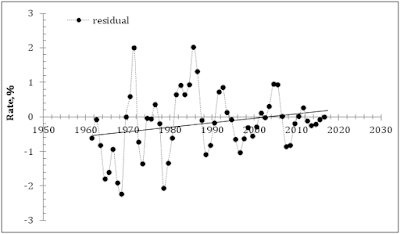 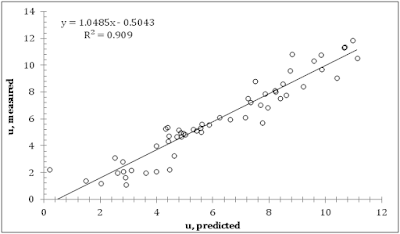 Figure 2. Upper panel: The measured rate of unemployment in the UK between 1963 and 2018 and the rate predicted by model (2) with the real GDP per capita published by the MPD. Middle panel: The model residual, stdev=0.91% Lower panel: Linear regression of the measured and predicted time series. Rsq = 0.91.
at January 06, 2021