In the long run, the rate of unemployment in Canada will be growing. A four year update.

Here, I continue presenting cases of accurate predictions based on the link between real GDP and unemployment, which is a modified Okun’s law in an integral form. This is a four-year update for Canada. The model prediction is getting better and better!

Canada provides an excellent set of macroeconomic data, which can be described by a few deterministic links with a high level of reliability and confidence. We have retrieved real GDP (GK per capita) data from the Total Economic Database and the rate of unemployment from the OECD. In 2012, we published a paper in the Journal of Theoretical and Practical Research in Economic Fields, where presented the first version of the modified Okun’s law for developed countries including Canada. The model was estimated till 2010 and used the data available in 2011.
The original model for Canada was also presented in this blog in 2011. It’s time to revisit the model and its predictions. It has to be mentioned that all coefficients below were estimated 6 years ago and we do not change them. Overall, the model is estimated using the LSQ technique to the integral version of Okun’s law:

where u(t) is the predicted rate of unemployment at time t, G is the level of real GDP per capita, a and b are empirical coefficients. For Canada, we estimated the model with a structural break allowed by data somewhere between 1980 and 1990. The best-fit (dynamic) model minimizing the RMS error of the cumulative model (1) is as follows:

This model suggests no shift in the slope and a bigger change in the intercept around 1983. Figure 1 depicts the observed and predicted curves of the unemployment rate. Considering the accuracy of measurements for both involved variable the fit is excellent. The integral form of the dynamic Okun’s law (1) is characterized by a standard error of 0.66% for the period between 1971 and 2016. The average rate of unemployment for the same period is 8.12% with a standard deviation of the annual increment of 0.92%.  Figure 2 shows that when the observed time series is regressed against the predicted one, R2=0.87. 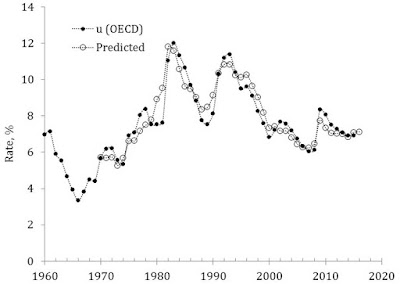 Figure 1. The observed and predicted rate of unemployment in the Canada between 1970 and 2016. 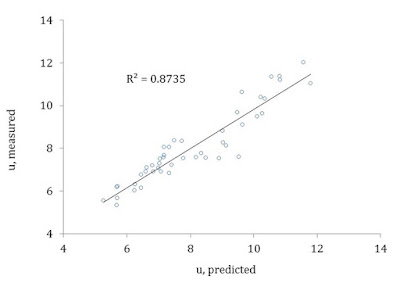 Figure 2. The measured time series is regressed against the predicted one. R2=0.87 with both time series likely to be stationary.
at January 11, 2017